The AWS Copilot core team is announcing the Copilot v1.18 release. Special thanks to @corey-cole who contributed to this release. Our public сommunity сhat is growing and has almost 280 people online and over 2.2k stars on GitHub. Thanks to every one of you who shows love and support for AWS Copilot.

The AWS Copilot CLI is a tool for developers to build, release, and operate production ready containerized applications on AWS.
From getting started, pushing to staging, and releasing to production, Copilot can help manage the entire lifecycle of your application development. At the foundation of Copilot is AWS CloudFormation, which enables you to provision infrastructure as code in a single operation. Copilot provides pre-defined CloudFormation templates and user-friendly workflows for different types of micro services creation and operation, enabling you to focus on developing your application, instead of writing deployment scripts.

See the section Overview for a more detailed introduction to AWS Copilot.

Contributed by Penghao He

If you have domains managed outside of Route 53, or want to enable HTTPS without having a domain associated with your application, you can now use the new --import-cert-arns flag to import any validated certificates when creating your environments.

Then, you need to specify aliases that are valid against any of the imported certificates in a Load Balanced Web Service manifest:

Specifying http.alias in service manifests is required for deploying services to an environment with imported certificates.

Now, your service has HTTPS enabled using your own certificates and can be accessed via https://v1.example.com!

Controlling Order of Deployments in a Pipeline

Copilot provides the copilot pipeline commands to create continuous delivery pipelines to automatically release microservices in your git repository.
Prior to v1.18, all services and jobs defined in your git repository got deployed in parallel for each stage. For example, given a monorepo with three microservices: frontend, orders, warehouse. All of them got deployed at the same time to the test and prod environments:

Starting with v1.18, you can control the order of your deployments in your pipeline with the new deployments field.
With the manifest above, we're declaring that the orders and warehouse services should be deployed prior to the frontend so that clients can't send new API requests before the downstream services are ready to accept them. Copilot figures out in which order the stacks should be deployed, and the resulting CodePipeline looks as follows:

There are a few other enhancements that come with the new deployments field: 1. It is now possible for monorepos to configure which services or jobs to deploy in a pipeline. For example, I can limit the pipeline to only deploy the orders microservice:

2. Your pipelines can now deploy standalone CloudFormation templates that are not generated by Copilot. For example, if we have a repository structured as follows: Then I can leverage the new stack_name, template_path and template_config fields under deployments to specify deploying the cognito cloudformation stack in my pipeline: The final step would be modifying the copilot generated buildspec to copy the files under copilot/templates to infrastructure/ with cp -r copilot/templates infrastructure/ so that the template_path and template_config fields point to existing files.

Due to the possible service downtime caused by "recreate", we do not recommend using it for your production services.

Before v1.18, a Copilot ECS-based service (Load Balanced Web Service, Backend Service, and Worker Service) redeployment always spun up new tasks, waited for them to be stable, and then stopped the old tasks. In order to support faster redeployments for ECS-based services in the development stage, users can specify "recreate" as the deployment strategy in the service manifest:

Under the hood, Copilot sets minimumHealthyPercent and maximumPercent to 0 and 100 respectively (defaults are 100 and 200), so that old tasks are stopped before spinning up any new tasks.

In v1.17, Copilot launched support for sending traces from your Request-Driven Web Services to AWS X-Ray. Now, you can easily export traces from your Load Balanced Web, Worker, and Backend services to X-Ray by configuring observability in your service's manifest:

For these service types, Copilot will deploy an AWS Distro for OpenTelemetry Collector sidecar container to collect traces from your service and export them to X-Ray. After instrumenting your service to send traces, you can view the end-to-end journey of requests through your services to aid in debugging and monitoring performance of your application. 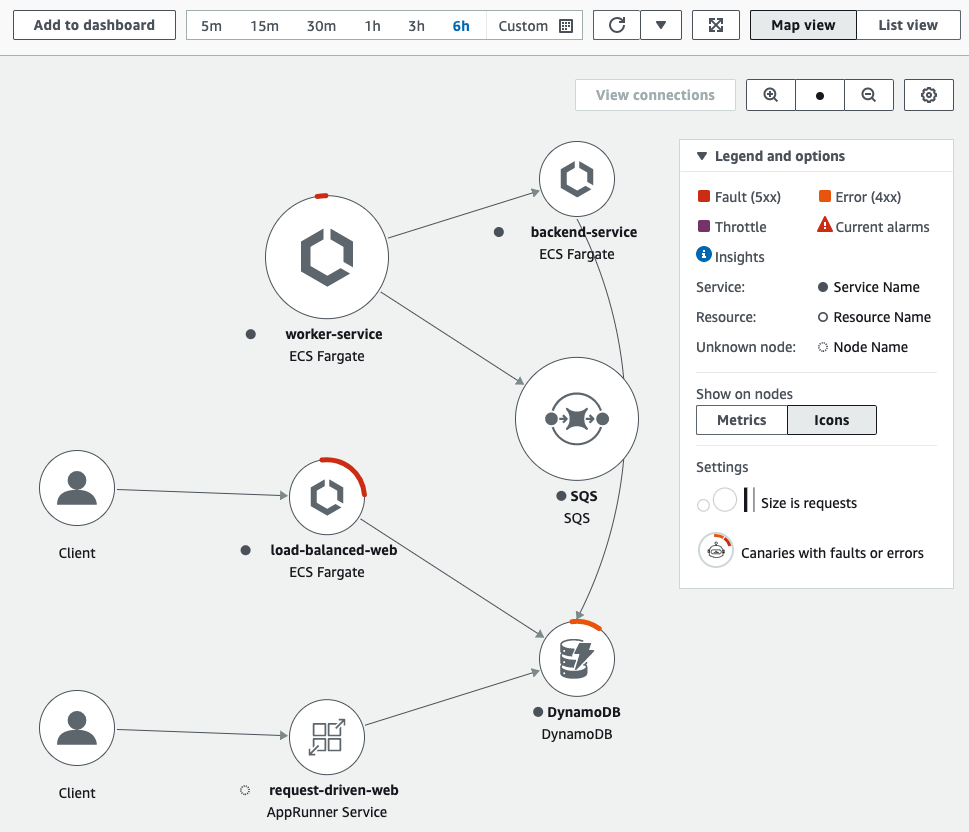 Read our documentation on Observability to learn more about tracing and get started!

Download the new Copilot CLI version by following the link below and leave your feedback on GitHub or our Community Chat: