Having an automated release process is one of the most important parts of software delivery, so Copilot wants to make setting up that process as easy as possible 🚀.

In this section, we'll talk about using Copilot to set up a CodePipeline that automatically builds your service code when you push to your GitHub, Bitbucket or AWS CodeCommit repository, deploys to your environments, and runs automated testing.

AWS CodePipeline is not supported for services with Windows as the OS Family. CodePipeline uses Linux-based AWS CodeBuild for the 'build' stage, so for now, Copilot pipelines cannot build Windows containers.

We won't get too philosophical about releasing software, but what's the point of having a release pipeline? With copilot deploy you can deploy your service directly from your computer to Amazon ECS on AWS Fargate, so why add a middleman? That's a great question. For some apps, manually using deploy is enough, but as your release process gets more complicated (as you add more environments or add automated testing, for example) you want to offload the boring work of repeatedly orchestrating that process to a service. With two services, each having two environments (test and production, say), running integration tests after you deploy to your test environment becomes surprisingly cumbersome to do by hand.

Using an automated release tool like CodePipeline helps make your release manageable. Even if your release isn't particularly complicated, knowing that you can just git push to deploy your change always feels a little magical 🌈.

Copilot can set up a CodePipeline for you with a few commands - but before we jump into that, let's talk a little bit about the structure of the pipeline we'll be generating. Our pipeline will have the following basic structure:

Once you've set up a CodePipeline using Copilot, all you'll have to do is push to your GitHub, Bitbucket, or CodeCommit repository, and CodePipeline will orchestrate the deployments.

Want to learn more about CodePipeline? Check out their getting started docs.

Creating a Pipeline in 3 Steps

Follow the three steps below, from your workspace root:

You need to have initiated at least one workload (service or job) before running pipeline deploy, so that your pipeline has something to deploy to your environments.

✨ And you'll have a new pipeline configured in your application account. Want to understand a little bit more what's going on? Read on!

Setting Up a Pipeline, Step By Step

This won't create your pipeline, but it will create some local files under copilot/pipelines that will be used when creating your pipeline.

Just like your service has a simple manifest file, so does your pipeline. After you run pipeline init, two files are created: manifest.yml and buildspec.yml, both in a new copilot/pipelines/[your pipeline name] directory. If you poke in, you'll see that the manifest.yml looks something like this (for a service called "api-frontend" with two environments, "test" and "prod"):

You can see every available configuration option for manifest.yml on the pipeline manifest page.

There are 3 main parts of this file: the name field, which is the name of your pipeline, the source section, which details the repository and branch to track, and the stages section, which lists the environments you want this pipeline to deploy to. You can update this anytime, but you must commit and push the changed files and run copilot pipeline deploy afterwards.

Typically, you'll update this file if you add new environments you want to deploy to, or want to track a different branch. If you are using CodeStar Connections to connect to your repository and would like to utilize an existing connection rather than let Copilot generate one for you, you may add the connection name here. The pipeline manifest is also where you may add a manual approval step before deployment or commands to run tests (see "Adding Tests," below) after deployment.

Along with manifest.yml, the pipeline init command also generated a buildspec.yml file in the copilot/pipelines/[your pipeline name] directory. This contains the instructions for building and publishing your service. If you want to run any additional commands besides docker build, such as unit tests or style checkers, feel free to add them to the buildspec's build phase.

When this buildspec runs, it pulls down the version of Copilot which was used when you ran pipeline init, to ensure backwards compatibility.

Alternatively, you may bring your own buildspec for CodeBuild to run. Indicate its location in your manifest.yml file.

Now that your manifest.yml, buildspec.yml, and .workspace files have been created, add them to your repository. These files in your copilot/ directory are required for your pipeline's build stage to run successfully.

This parses your manifest.yml, creates a CodePipeline in the same account and region as your application and kicks off a pipeline execution. Log into the AWS Console to watch your pipeline go, or run copilot pipeline status to check in on its execution. 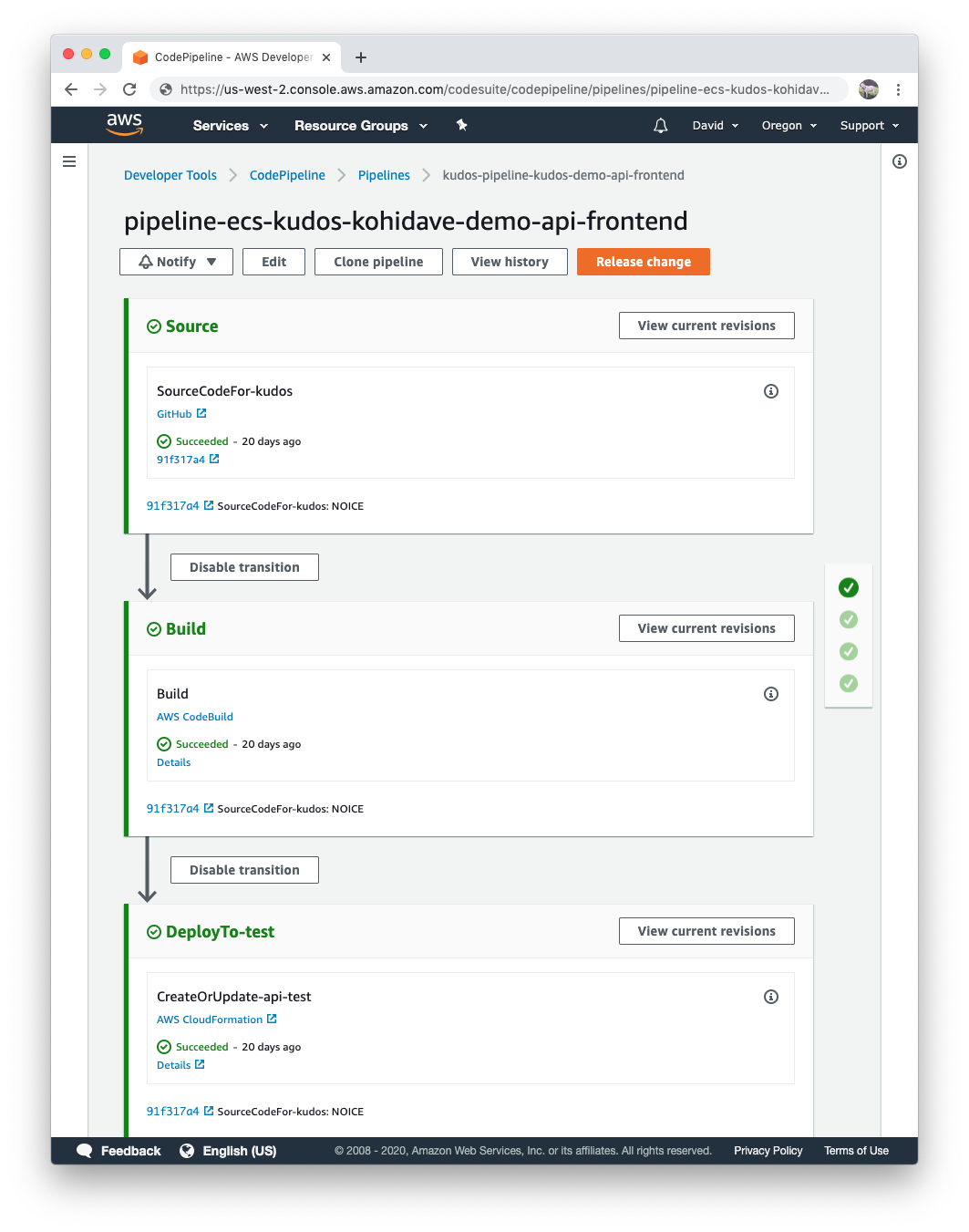 If you have selected a GitHub or Bitbucket repository, Copilot will help you connect to your source code with CodeStar Connections. You will need to install the AWS authentication app on your third-party account and update the connection status. Copilot and the AWS Management Console will guide you through these steps.

After creating your pipeline, you can manage the version of Copilot used by your pipeline by updating the following lines of your buildspec.yml to the latest version:

Of course, one of the most important parts of a pipeline is the automated testing. To add tests, such as integration or end-to-end tests, that run after a deployment stage, include those commands in the test_commands section. If all the tests succeed, your change is promoted to the next stage.

Adding test_commands generates a CodeBuild project with the aws/codebuild/amazonlinux2-x86_64-standard:3.0 image - so most commands from Amazon Linux 2 (including make) are available for use.

Are your tests configured to run inside a Docker container? Copilot's test commands CodeBuild project supports Docker, so docker build commands are available as well.

In the example below, the pipeline will run the make test command (in your source code directory) and only promote the change to the prod stage if that command exits successfully.